There are different types of tests that can be performed with a spirometer. The most important ones are the Forced Vital Capacity and the reversibility test. 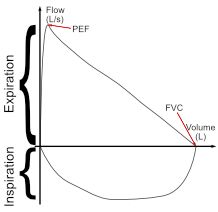 The forced vital capacity is by far the most widely used spirometry test.

For an optimal result, the patient will need to perform this maneuvre at least 3 times to have reproducible results. Most spirometers will calculate reproducibility automatically.

The results are expressed as a flow-volume loop, a volume-time graph and more than 20 parameters.

A reversibility test is performed when the results of an FVC test show signs of obstructive lung disease (Tiffeneau<70%).

The other spirometry tests are rarely performed outside a hospital setting.

the (Slow) Vital Capacity is performed the same way as the FVC but slowly.

Provocation testing with a bronchoconstrictor, like histamine or metacholine, is performed to induce an asthma attack and should only be done under the strictest supervision and with emergency care available.