In this article we offer information about the interpretation of the flow-volume loop. The other spirometry tests are not covered. 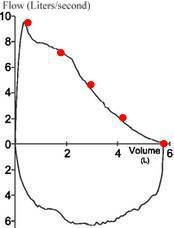 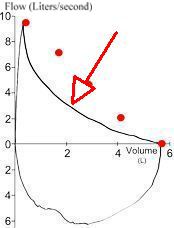 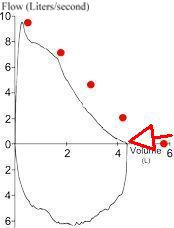 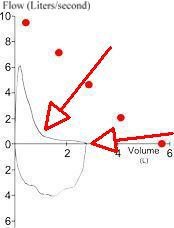 A normal expiratory flow-volume loop has a triangular shape with it's top at the left. The inspiratory part of the loop is shaped like a half circle.

The values of the parameters are higher than 80% of the predicted values, while the Tiffeneau index (FEV1/FVC*100) is higher than 70.

Obstructive lung disease is the most common diagnosis of a lung pathology when using a spirometer. The Tiffeneau index is below 70, which results in an indented or concave expiratory part of the flow-volume loop.

When obstructive lung disease is present, often a post-medication test is performed after administration of a bronchodilator like ventolin. In case the obstruction is reversible (FEV1 post-medication significantly higher than FEV1 premedication), the patient is likely to suffer from asthma.

Peak Expiratory Flow and FEV1 can be normal in restrictive lung disease, but are often low as well.

A spirometry form a patient with mixed lung disease shows both signs of obstructive and restrictive lung disease: both Tiffeneau and FVC are too low.

With these pathologies the flow volume loop is flattened. Three forms are distinguished: 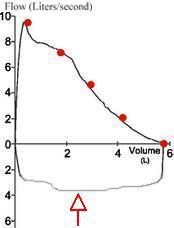 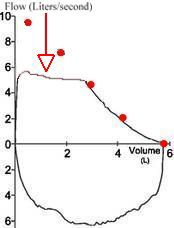 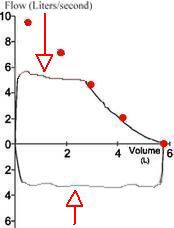